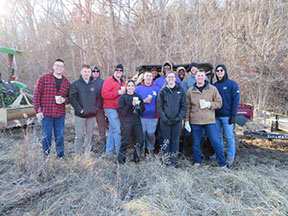 The Big Piney River Stream Team Watershed Association (BPRSTWA, Team 4623) has partnered with Mark Twain National Forest for several years on riparian restoration projects on Forest Service land along the river. Starting with a planting of more than 1000 trees in early March of 2020, Stream Team members also received assistance from Engineering Officer Training classes at Ft. Leonard Wood. During late 2021 and early 2022, this partnership has included work on: 1) autumn olive eradication efforts in the riparian area of the Big Piney River near Duke, and 2) preparation for a three-acre pollinator planting in the flood plain on Mark Twain National Forest land in the Elder Piney section.

BPRSTWA held five workdays for the autumn olive eradication effort, removing shrubs, some 40+ years old, that have spread along the road and in exposed areas. The goal is to eliminate competition with native plants; some areas have also been planted with new native shrubs and trees. The Fort Leonard Wood Engineering students are here from across the U.S. on six-month rotations. They are required to complete 500 volunteer service hours per class during their stay and some classes enter into friendly competitions, to the benefit of the river and Missouri Stream Team. The Association provides tools, gloves, lunch, drinks, snacks, and Stream Team t-shirts. Those purple shirts will be seen on Army posts throughout the country! 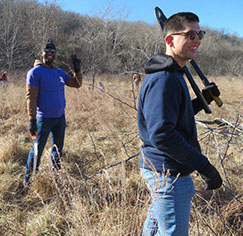 Work on the Elder Piney section in February this year started with a marathon chainsaw cutting of thorny locust trees from the pollinator acreage which 18 engineering officers hauled by hand, tractor, and ATV; the latter pulled out of the muddy field later by the tractor! This is the same site where BPRSTWA members also planted trees and shrubs about 15 years ago, most of which have survived and grown to a good size. This new effort is in collaboration with Daphne Kampinga, Fish and Wildlife Biologist with Mark Twain National Forest. The Forest Service provided heavy equipment assistance, stump herbicide, and forb/warm season grass seed for the project in addition to personnel during each of the workdays. BPRSTWA will supplement Forest Service funds with volunteer time, use of a tractor, tree planter, seeder, tractor-mounted sprayer, backpack sprayer, and chainsaws. Future collaboration with the engineering officers will include monitoring floats with trash pickup and invasive Japanese hop pulling, accompanied by gravel bar lunches and unsurpassed views of bluffs and spring wildflowers. No one should come to Missouri for six months without taking at least one float on an Ozark river! 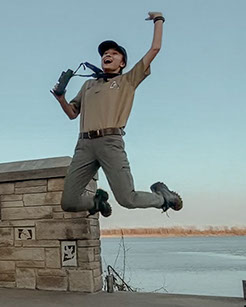 Hello!! My name is Cara Arrigo, and I am the new Stream Team Coordination Biologist for MDC! I am from the St. Louis region, and I received my Bachelor of Science from Murray State University in Wildlife Biology/Conservation Education. My career with the department started last year, in my position as a Natural Resource Assistant where I delivered public programs on a variety of nature topics and outdoor skills, helped with large events, and assisted with wildlife monitoring. Before starting my career with the department, I worked in the interpretive division of the National Park Service, the Forest Service, and Missouri Department of Natural Resources, where I taught a variety of audiences about streams, caves, and wildlife. While achieving my collegiate degree, I gained experience as an undergraduate research assistant, analyzing samples of aquatic invertebrates to maintain a long-term dataset of a stream’s water quality. 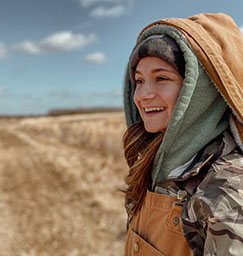 I am also a water enthusiast in my free time; all four years of undergrad I was a collegiate rower and I also like to fish and wakeboard. Last, but definitely not least, I have a dog, Fjord, who is my best friend and comes on all my adventures with me. I look forward to working with and meeting all our amazing volunteers! 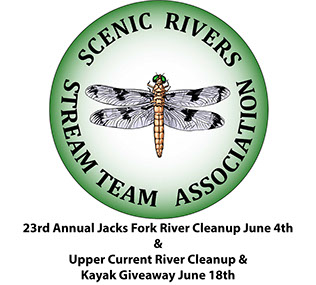 Bike With Your Boots 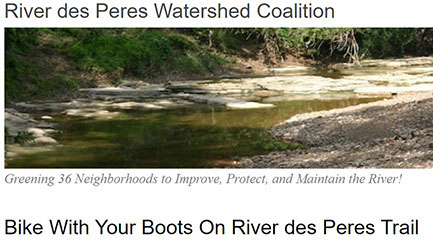 Save the Date for Bike With Your Boots On

Join us on June 11th at 9 AM. No experience in water quality testing is required but everyone must wear a bike helmet and bring their own bike. Be prepared to get your feet wet! Meet at Fultz Field in the River des Peres Park along River des Peres Rd, north of Gravois Road.

We will bike the length of the trail, stopping at creek crossings to monitor the water quality using chemistry kits provided by Missouri Stream Team. We can use the data collected throughout the day to have a snapshot of the health of the River des Peres watershed. Kids welcome!

Validation training must be completed every 3 years for monitors certified at Level 2 or above. 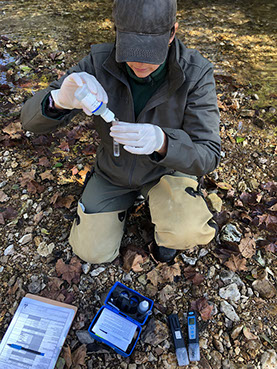 Spring is here and water quality monitoring is in full force! Not only do we have data being submitted online, but we also have equipment requests coming in.

We usually recommend requesting your equipment 2-3 weeks prior to your monitoring trip. Unfortunately, our program is experiencing supply shortages and delays in shipping from our vendors. Some recent orders have taken a full month to arrive at the doorstep of our volunteers.

Please don’t delay on ordering your monitoring equipment. If you’ve ordered equipment and have not received all your order within 3 weeks, please contact Stream Team staff at streamteam@mdc.mo.gov.

Since our last issue of Channels, Stream Team members reported:

Check out more highlights below . . . 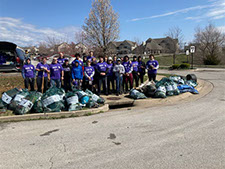 Searching for Watershed Champions in Missouri

Stream Teams United is searching for “Watershed Champions” across the state of Missouri!

This year, Stream Teams United is embarking on a project to create several short videos that highlight individuals who have water-friendly practices on their property – whether it be their yard, field, or farm property. All watersheds consist of the individual properties located within their geographic area – which can be hundreds to thousands of properties in any given watershed. How each person manages their land – whether it be an 1/8 of an acre, or a thousand acres, impacts the health of the watershed and downstream water quality. 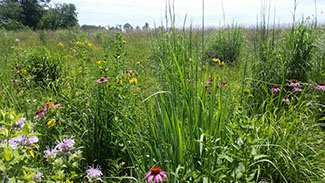 Of course, if you are a registered Stream Team member, you are already a champion for your local watershed. Through this project, we are hoping to highlight and share the stories of people who are helping to improve the quality of water running off their property with various “good watershed practices.” By sharing these stories, we hope to inspire more people in Missouri watersheds to try these practices on their own properties.

Do you know someone in Missouri who has water-friendly practices on their property who may be willing to share their story? If so, please reach out to us at info@streamteamsunited.org or call Mary at 573-586-0747. 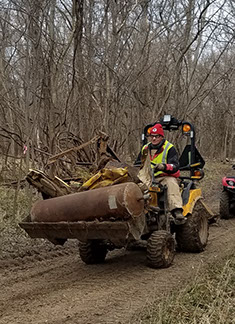 “Club City” is an area in the Meramec River watershed owned by St. Louis County Parks and Winter Brothers Material Company off Butler Hill Road. This site is highly prone to flooding and had never been cleaned up before. Members of the League of Watershed Guardians (Team 5168) accepted the challenge to work this 40-acre site, without blinking or thinking twice. Bernie Arnold of (The Mighty) Stream Team 211 was instrumental in getting permissions, clearing trails, and scouting the area beforehand to mark any potential dangers (large holes, barrels with questionable contents, pressurized tanks, etc.).

The trash to be hauled out of the area included 10 boats, several inboard engine blocks, a jet ski, appliances, a van, water heater, multiple barrels, and rusting tanks. A large amount of smaller trash (glass and plastic bottles and containers, a vacuum cleaner, carpeting, TV’s, microwave, etc.) was also removed.

On February 12, we had 21 hardy volunteers, two tractors, two ATVs, and a UTV helpling to remove trash from this flood-prone area. Two-thirds of one dumpster was filled, plus multiple tires and scrap metal were removed.

I had to ask to report the cleanup results because I wanted to express how much effort Bernie Arnold put in to cleaning this area, knowing he would not ‘toot his own horn.’ He was on site days before Feb. 12 and almost every day afterward on a solo mission, weather permitting, through March 14. Bernie is well known in the Stream Team Program as a force all his own with a passion to conserve our natural lands and waters.

While many helped, Bernie is solely responsible for completing the filling of the first dumpster and the entire second dumpster on site, as well as the bulk of scrap metal, removing rims, and loading the tires onto his trailer. If the area owned by STL County Parks is ever designated as a conservation area someday, we hope it is named after Bernie.

A big “Thank You” goes out to Ryan Winter for offers of help and allowing access to his property, and to St. Louis County Parks for access and providing the 40-yard dumpsters. Another shout out goes to Kent Schmidt, Team 4922, who also did major damage to the trash with his tractor by removing five of the ten boats, a huge 500-gallon barrel, and several appliances.

We hope to return to this area in January/February of 2023 to continue to remove more trash along the Winter Brothers property on Butler Hill Road, from this area north to the private homes on this stretch of road.

Photos can be seen here: https://sites.google.com/streamteam5168.org/lowg/events/club-city-cleanup-photos

Congratulations to the 2021 VWQM Data Star award winners!  We just want to celebrate those who were able to collect full submissions for their sites. These dedicated volunteers completed at least two submissions of macroinvertebrates, discharge, water chemistry, and visual survey as a level 1 trained volunteer or higher! We are inspired by the Data Stars’ dedication to continue providing data on Missouri streams during the year 2021.  We also appreciate the high-quality, long-term data they have provided for streams throughout Missouri. So once again, thank you and congratulations to the 2021 Data Stars!